20 Random Thoughts about the 2016 POTUS Race

In a recent post (The Lies I Tell Myself), I shared what it is like to struggle with anxiety.

It was a hard post to write, and I still sometimes want to delete it and just hide from it.  But, it is a part of what makes me the person I am, and if you’re going to judge me for it, that’s on you.

For most people, the thoughts that anxiety causes don’t make sense.  Or they really don’t understand what the thought process is.  Well, thanks to Sara Bareilles, I can offer a small glimpse of what types of thoughts go through my head when I have to meet new people, or really just interact with people in general.

I stick with real things,
Usually facts and figures.
When information’s in its place,
I minimize the guessing game.
Guess what?
I don’t like guessing games.
Or when I feel things,
Before I know the feelings.
How am I supposed to operate,
If I’m just tossed around by fate?
Like on an unexpected date?

Sara Bareilles “When He Sees Me”

Aside: This song is from a musical that she wrote the music and lyrics for called “Waitress“.  It just did a short run in Boston and will be hitting Broadway starting next March.  A selection of songs from this show was recently released, and I took a short break from listening to “Hamilton” on repeat to listen to it.  Both are really good albums and I want to try to get to NYC to see both.

Planning on taking a picture with your smart phone? Read this first.

Here are some cameraphone #protips to kick off 2015.  You can thank me later.

1.  If you don’t look your best in a selfie (remember to hold the phone with your arm extended above your head for the most flattering angle), or it is not in focus, or your finger is in front of the camera – just take another!  No shame in aiming for your best look in each and every selfie!

2.  Clean off your cameras on the regular.  There are likely fingerprints on it, which leads to smudgy photos.  This includes the forward facing one.

3.  FOCUS.  Before you click, select your focus point.  Please.

4.  If it is super blurry – consider not posting.  While your moment across the room from the President may have been amazing, the crappy blurry photo that makes him look like a blob doesn’t really help us be in the moment with you.

5.  Background awareness.  Make sure you aren’t capturing anything uber-awkward in the background of your photo.  You don’t want to end up on a Buzzfeed list of the most inappropriate photo backgrounds of all time, do you?

9.  Just because you can, doesn’t mean you should.  Don’t overshare.

It’s summer in Minnesota – finally!  The sun is shining.  I can drive with my windows down and the sunroof open.  I can hangout in my backyard and not *have* to have a fire going.

Still plugging away at the whole yoga thing.  It’s actually been kinda fun since I can go at my own pace and not feel like I’m being judged by others in a class. I can already feel some of my muscles responding (with some discomfort – but not pain!) and my shoulder isn’t protesting.

It’s also amusing to be in the downward facing dog during my sun salutations, and look over to see this guy doing the same thing. 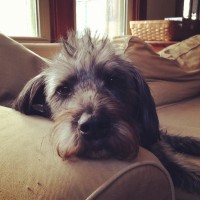 It seems as if Scout may like the whole yoga thing too.  The cats, not so much.

I’m happy to have also found some creative inspiration again.  I’m also working on reorganizing my existing photography and other projects so I can share.  Expect some of the results to show up here soon.

Time for some relaxation and more House MD on Netflix.

If I ran the Olympics, all figure skaters would have to use Beyonce

Thank you Buzzfeed for pairing up “Drunk in Love” with Meryl Davis and Charlie White’s free dance.  Figure skating needs a bit of additional fierceness that only Bey can bring, right?