Some may know this and some may not, but I must confess . . .I’m a bit of a musical theater geek.

I have been known to get into a mood where I’ll become a one-woman musical and just belt out my favorite songs, dance around and just have fun doing my own off-off-off-off-off-Broadway productions.  It is actually one of my life goals to have a musical break out around me – I guess it would be more of a flashmob – but you get my point.  I would not be sad in the least if someone came up to me and said that they wanted me to move to New York right away to be on Broadway for a few weeks.  Granted my singing skills aren’t those of a Broadway lead, but I can totally sing back up and sway in the background – not. a. problem.  And the campy dance numbers!  Sign. me. up.

Growing up I saw a lot of shows in Chicago, including Joseph and the Amazing Technicolor Dreamcoat about a bajillion times during its long run with Donny Osmond at the Chicago Theatre and Jesus Christ Superstar in religion class during lent.  Not to mention my stint in choir in grade school included numbers from Phantom of the Opera and JCS and in band throughout the years we played various musical numbers and I have also done solo performances of some of my favorite songs.  There is something utterly beautiful about musicals.  Something that sets the music apart form the rest of the music that is out there.  The strong chords, the beautiful ballads, the drama, suspense and emotion that comes through the songs is just almost unexplainable.  You know what I’m referring to, that feeling you get when the music just hits you (i.e. ~2:30 in “I Don’t Know How to Love Him” from JCS, ~4:30 in “Defying Gravity” from Wicked, ~1:00 in “One Hand, One Heart” from West Side Story, or ~3:08 in “I Dreamed a Dream” from Les Mis).

I should get back to my tasks for today, which totally includes singing and dancing around my house. 🙂

Today is a busy day, so clearly I needed to take a few minutes to share some randomness.

All four KFC and Pizza Hut restaurants in Nepal shut down on Tuesday saying that staff had attacked and threatened to kill branch managers.  Devyani International, which operates outlets of KFC and Pizza Hut in Nepal and neighbouring India, wrote a letter to authorities announcing the immediate closure of its eateries in the capital Kathmandu.

“In order to disrupt our operations, some staff have physically attacked and threatened to kill the senior managers,” the company said in a letter leaked to local media and seen by AFP.

“These acts have put the life of senior managers at risk. To maintain the safety of our restaurants and the staff, we have shut down our services for an indefinite period,” it said.

The shutters were down at the four restaurants on Tuesday, and Devyani International and the police were unavailable for comment.

Now, this warrants being posted for two reasons:

I have no real reason for posting this other than it’s a photo that never ceases to amuse me.

Granted, the circumstances that led to this photo being possible were scary and tragic, and I know the folks impacted by the flooding are still recovering.  Help if you can, cool?
If you’re in Minnesota or Wisconsin, vote today.  If you’re not in either of those states (and even if you are!), do something nice for someone today.  Share some kindness.

What is this feeling?

Twice yesterday, I received a comment from someone that made made me pause and think, “is it really that obvious?!?”

Now, one may think this was a negative thing, but it wasn’t.  In fact, it is extremely empowering and smile inducing.  This was the case yesterday when it was pointed out how happy I seemed.  There is something awesome when someone can tell you are truly happy with where you are in your life.

Genuine happiness is a thing that can’t be faked. 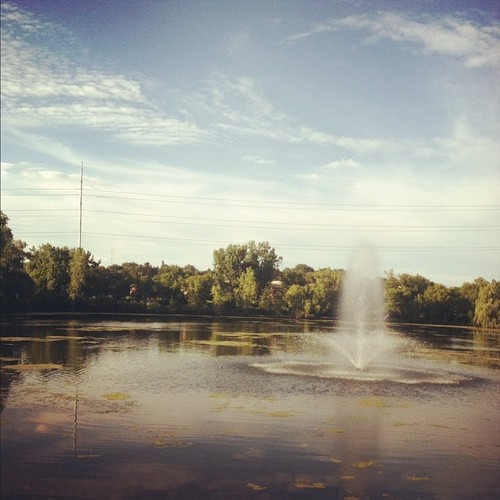 It’s been awhile since I’ve had time to write.  I know, I know, super lame excuse, but it’s the truth.  I’m also working on moving this lil’ thing I do here from Posterous to WordPress and also developing this into a bit more of a “site” instead of a just a blog.  It’s an ongoing process, as life is, but I’m looking forward to using the creative skills of some of my friends to make this something that truly reflects me, what I do, who I am, and looks cool too.

I’ve had a lot of changes as of late – some pretty major ones – but I’m experiencing this thing that I believe is called happiness!  😉  I’ll probably recap some of the stuff at some point, but suffice it to say, all is well in my world and I feel good, happy, content, excited, and a whole bunch of other positive emotions.

“Cause we are
We are shining stars
We are invincible
We are who we are
On our darkest day
When we’re miles away
So we’ll come
We will find our way home”
“Carry On” by Fun.

“Dream your dreams but don’t pretend, make friends with what you are”

The song “The Age of Worry” off of the latest release from John Mayer has been on repeat on my Spotify.  Musically, it is quite lovely – both the full album and some acoustic versions I have heard.  In addition, the lyrics just speak to me and are great reminders as we face the worries and challenges throughout our lives.

END_OF_DOCUMENT_TOKEN_TO_BE_REPLACED

What is a manifesto?  For me, it’s a mantra – a series of words that reflect how I live my life (or try to) and give me reminders to stay focused on what makes me happy.  I’ve posted this mantra before, but it’s somethat that deserves repeating. . . . .

Be thankful. Be happy. Be in the moment. Learn from the past, live for today and prepare yourself for the future. Don’t be afraid to do, be afraid of not doing. Embrace change and the unknown. Learn and share. Take care of you. Give yourself to others. Dream. Be the brightest star you can. Live.